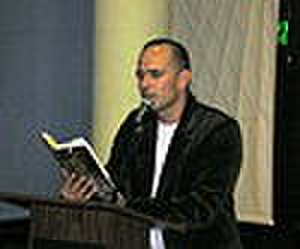 Mark Z. Danielewski (; born March 5, 1966) is an American fiction author. He is most widely known for his debut novel House of Leaves (2000), which won the New York Public Library's Young Lions Fiction Award. His second novel, Only Revolutions (2006), was nominated for the National Book Award.

Danielewski began work on a proposed 27-volume series, The Familiar, although he completed only 5 volumes before halting the project in 2017.

Danielewski's work is characterized by an intricate, multi-layered typographical variation, or page layout. Sometimes known as visual writing, the typographical variation corresponds directly, at any given narratological point in time, to the physical space of the events in the fictional world as well as the physical space of the page and the reader. Early on, critics characterized his writing as being ergodic literature, but recently, Danielewski, who has commented on his disappointment with criticism's inability to properly confront his work, expressed his theoretical approach to literature:

Signiconic = sign + icon. Rather than engage those textual faculties of the mind remediating the pictorial or those visual faculties remediating language, the signiconic simultaneously engages both in order to lessen the significance of both and therefore achieve a third perception no longer dependent on sign and image for remediating a world in which the mind plays no part."